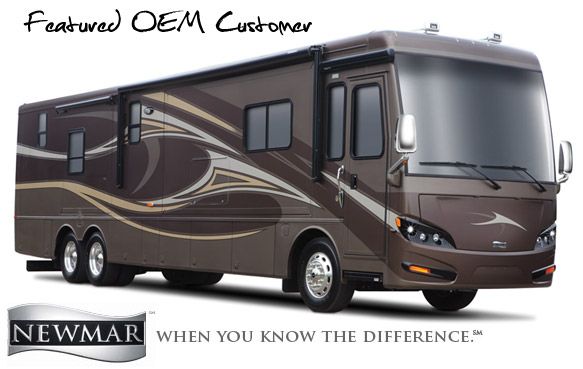 MCD Innovations, the world's leading manufacturer of premium RV accessories, and known for their American Duo® Shade system announced that Newmar Corporation is installing MCD Shades in their 2011 Dutch Star and newly re-designed 2011 Ventana models. The windshield and driver/passenger shades in the Ventana replace the visors and curtains that have been installed in the past.

The Dutch Star model will also include the cockpit shade system along with manual day/night house shades. The addition of MCD shades will provide an updated look and functionality to both coach models.

“With Newmar’s high standard of craftsmanship and their ability to lead the industry with their innovative products, we are pleased that they have selected the American Duo Shade system for two of their most popular coaches,” said MCD Innovations CEO Dave Townsley. “We look forward to working with Newmar and providing their customers the best the industry has to offer in solar protection, outward visibility, and privacy.” If you would like more information on any MCD Innovations product call 800.804.1757, contact MCD or look at the product information found on this website.

The 1980s brought many changes to Newmar. The London Aire was introduced, the Kountry Klub for owners was started and Mahlon Miller became Chairman of the board.

In the 1990s, the Dutch Star was launched followed by the Mountain Aire. Mahlon Miller became the sole owner of Newmar Corporation and, also in 1991, Newmar introduced a patented slideout in both Class A and Fifth wheel models. In 1995 the company moved into a new 116,000 square foot state-of-the-art facility. 1998 was the year Newmar offered full paint exterior graphics and built an 18,900 square foot facility for that purpose.

The turn of the century gave us the Mountain Aire Limited Diesel Pusher, which was the first Newmar product to offer a triple-slideout floorplan. The Essex replaced that coach as a luxury model that was within reach of a larger consumer market. In 2007 the top-of-the-line King Aire was introduced for the most demanding RV connoisseurs. In 2008, the Class A Ventana was redesigned and offered an incredible value for a wide range of RVers.

Newmar, a company based on Christian principles, has grown from a company of six people in 1968 to a company employing more than 900. In addition to an increase in staff, the Newmar facilities have also experienced tremendous growth. In the fall of 2004, Newmar opened a new 144,000-square-foot Chassis, Weld and Assembly Facility. This building also houses employee offices, training, and conference rooms.

At Newmar, they believe that a motor coach is more than just a vehicle, it’s a passport to countless hours of fun and lifelong memories taken from quality time spent with family and friends. For over 50 years, we’ve applied our principles to the creation of motor coaches that have allowed people all over the world to live the RV lifestyle. And they plan to continue for countless generations to come, which is why they take pride in every rivet, weld, and mechanical function.

If you want to learn more please take a look at the Newmar Corporation website: newmarcorp.com